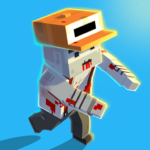 Infected by a virus secretly studied by the governement,
I became a zombie.

The government scientists locked me up for experiments.
One day, a natural disaster paralyzed the city and I was able to escape…

* As the infection goes on the survivors unite and become stronger.
* Use skills to defeat the strengthened survivors
* Increase the number of ally zombies and summon special zombies!
* Upgrade the storage to turn multiple people into zombies at once.