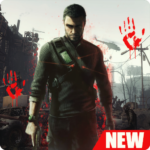 During the secret experiment a dangerous vaccine has developed very powerful virus which turns them into zombies. This virus spreading all over the world and very few has left for survive and you are one of them. Shoot into the dead, stop the unkilled invasion and save humanity in the king of FPS zombie survival games. You could be infected by zombies easily if you do nothing for your protection. Want to survive? Turn yourself into a zombie shooter, gear up with weapons and make your way through numerous realistic levels in this best zombie shooter game. The only hope left is you!

War has been break out between survivors and zombies, so train gun shooter skills as survivor in front line fighting for your fps zombie survial game You have to fight as elite sniper hunter for survival in zombie apocalypse games with best zombie first person shooter experience.Survival need to be catchers and zombie killer, there are many people are hunting crazy zombies outside, your target is undead zombies. Will this warfare complete or not in this Zombie game? It depends on you – the best shooter survivor!

Realistic Zombie Shooting Experience:
Zombie War survival is NO.1 zombie shooting games where you will experience a real zombies war. Defeat zombie bosses in special missions, Travel to zombies open world game and kill zombie enemies through tons of missions. Resist the dead rising and survive one last day in the best zombie shooting games.This Zombie game is offline shooting game with simple game play, you can die just by a bite of zombies. You have many ways to play Zombie hunter , the top 1 fps zombie survival games!

Best Offline Zombie Survival Game:
Want to play offline? No need to worry you can still enjoy the best zombie survival games offline 3d just for free. Fight, attack and shoot out as sniper hero hunter in this zombie attack action apocalypse FPS RPG and feel the adrenaline of battle. Get ready to fight against the forces of evil! Hunting zombies have never been so funny! OK, If you like First Person Shooter (FPS games), zombie survival games,zombie shooting games,zombies open world games, sniper games and action war games, you will enjoy Zombie hunter !

Stunning Graphics And Gameplay:
Zombie War Survival provides first the most realistic and amazing graphics and zombie fps game experience. Zombie war survival is the best post apocalypse zombie game with the FPS and action elements. Join Zombie hunter army and start shooting every walking dead in ultimate zombie open world game. Enjoy this wonderful FPS zombie action game.Take part in this shooter game and become a survivor hero fighting against undead plague in zombie FPS battlefield. There is not enough arsenal or bullets at frontline battlefield.Survive at any cost in this shooting FPS zombie apocalypse

First Time Zombie Open World Game:
This game is open world game where you got to survival in zombie and their infection.Keep your finger on the trigger of your gun, aim and shot to ensure your survival in this realistic first person shooter with impressive sniper arsenal to make zombie dead. You want to play open world third person shooter game then this survival open world game is for you Offline Zombie Shooting Games.Stop the dead rising and survive one last day in best zombie shooting games.Survive at any cost in this shooting FPS battle.