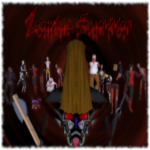 Zombie Survival Game – Build and Survive a Brutal Horror Game, a Horror Shocker with Craft and Building , Build in the Forest in the 3rd person view. Build a base or village. Defend yourself against the zombie tsunami! Objective: Survive as Ash has nearly overslept the zombie apocalypse. The dead are out of their grave and want your brain , become a zombie hunter! stop the waves of the zombies and survive !! stop the pandemic! Do not let the zombie virus infect you, do not be nervous Falls trees to gain wood, build wooden walls that provide good zombie defense, build yourself later robust concrete walls, etc., until you have built a beautiful house that protects you from the dead. Now you have to do concentrated research to construct weapons, build a table and a bookshelf learn diligently, then dismantle iron to construct weapons. Do not forget to drink food and go to the toilet! How you didnt build any of it and the zombie hordes are Destroying the walls ? have no fear ! Run fast and search the survivor with the battle axes he can help you! Target in this third person zombie survival and craft and base building is to research a zombie antivirus and survive against the dead. Wherever you want, you can build a house or build a fortified fortress to do handicrafts and other important things. Collect ore, timber and uranium, combine many other resources such as coal or ammunition and build yourself from it Many useful house items and weapons, such as. Bear trap or a brutal shotgun, there is no chainsaw. An extensive zombie-building game with almost open-world is waiting for you with day-night changes and zombie hordes! Crafting, Much Resources, Realistic Needs, 6 Weapons, Open Construction World, Horror Blood Splatter Game Experiences;), Survivors, Zombie Dead Counter, Strong Sound and Graphics, Class Animations, Very Long Gameplay, Saving, and a Genius Game experience! may be dont missing in any zombie survival game, base-building game collection. All this and much more Complete Free !!!
Ver. 1.9 Release Notes.