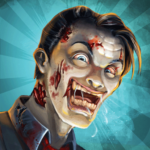 The world is being overcome by an overwhelming population of the walking dead. In a time where resources are scarce, it is up to YOU to eradicate the undead and take back what is rightfully ours.

Play with over 3 million players in this MMO RPG text based game for FREE!

▶ Slay undead in over 40 worldwide locations!
▶ Battle over 100 super zombie Bosses!
▶ Level up, choose your skills and customize your Slayer
▶ Play with friends
▶ Join Factions and battle thousands of other Slayers!
▶ Craft your own weapons and equipment!
▶ Rank on global and social Leaderboards across multiple categories!
▶ New content added weekly!

Only you can take back the earth, one exploding zombie head at a time. Arm up, load out and get slaying!

Note: this game can only be played while online.

This update includes bug fixes and compatibility improvements. We always appreciate your feedback at http://support.kanoapps.com, and if you really wanna do us a favor, leave us a review!