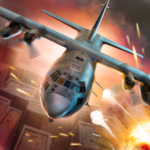 Survive the apocalypse and play this zombie survival game. Unleash hellfire into the dead from your gunner seat in the AC 130 Gunship. In a world where most of the population is dead or turned zombie, a few survivors picked up weapons to fight the zombie army attack.

Build up your defense in your base as the last shelter against the zombies. Help your ground troops who are left to survive with shadow strikes from your gunship. The survival of your squad against the walking zombies is the key to glory.
Equip your AC 130 gunship with undead killing weapons and upgrade them for more damage. Shoot into the dead zombies from above to defend your army. Loot precious resources, gold and other rewards, bring them back to base and build your defenses to repel an army of zombie assaults in this survival game.

BUILD YOUR ZOMBIE SHOOTER ARMY:
– Play Assault, Demolition, Sniper and Scout and equip specialized weapons.
– Use gold to upgrade your defense, equipment and firearms to get more rewards the game has to offer.
– Unlock realistic zombie killing weapons and build an army to defend.

ZOMBIES ARE AT YOUR DOOR:
– Collect gold and other rewards to build better defenses in your shelter.
– Upgrade weapons and guns for glory.
– Grab your powerful guns and shoot to kill infected zombies in first-person military shooter gameplay, as you target survival in the zombie apocalypse.

SHOOT FROM THE SKIES WITH SNIPER WEAPONS:
– Collect realistic sniper guns and weapons to play with and increase your efficiency of your AC 130 gunship.
– Provide air support from a mounted gun and lead an army of military survivors against the dead hordes of zombies before they kill you.
– Shoot zombies to unlock new missions to play in sniper shooting game, increase your rank and get more gold

UNDEAD BASE DEFENSE:
– Play and build up your remote airfield as a base of operations and last line of defense against zombies. Ready your gun and withstand the infected army of the dead.
– Upgrade your defenses, weapons and guns to defend your army base against zombie assaults in this zombie shooting game.
– Wage war with your army and play zombie survival games in a hostile environment. The ultimate survival shooter! Shoot undead zombies enemies!

SHARE WITH FRIENDS
– Discuss strategies in sniper shooter game with friends.
– Share your zombie kill scores and what rewards you got for more gold.
– Play with a vibrant community.

Parental guide
Zombie Gunship Survival is free to download and play, however some game items can also be purchased for real money. If you don’t want to use these features, please disable in-app purchases in your Google Play settings. According to our Terms of Service, Zombie Gunship Survival is allowed for download and play only for persons 16 years or more of age, or with explicit parental consent. You can read more here: ‘http://www.flaregames.com/parents-guide/FESFES.
Various improvements, polishing and bug fixing.