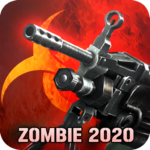 The walking zombies run like tsunami wave. Grab your gun and take the shot.

Zombie Defense Shooting is a hunting zombie theme shooting game. A dangerous Z vaccine has powerful virus that turns humans into zombies. This deadly virus spread caused zombie outbreaks and people immediately faced the danger of death. As the last Zombie Hunter of mankind, you must guard the borders and stop the spread of the Zombies!

Various zombies:
– In the Zombie Defense Shooting, Zombie comes from anywhere in the city ruins, they have different jobs, characteristics and abilities, they are hunger, want to kill any living things！
– This zombie game not only has normal zombies, some huge zombies are bosses, they are more difficult to destroy！
– There will always be unexpected zombies to kill you. When you play Zombie Defense Force, need to pay attention to the changes on the battlefield, zombies always appear in unexpected places!

– Complete missions, get bonuses and equip your weapons to kill all crazy zombies, protect your borders and win this shooting game
– You want to play zombies, don’t make any mistakes in shooting and hunting. To trigger quickly, always pay attention to your strength and durability！

War game with realistic 3D graphics and effects:
– Zombie hunter can feel the real experiment in this sniper game, every action and effect in the battle is exciting!
– Zombie Defense Forces with many gun types, each with its own features and parameters, you should choose the right gun for each evil!
– Special effects make guns more powerful and effective in zombie fighting games.

Now you can experience an attractive shooting game offline through addictive fps games, various zombies, many exciting missions, and different scenes not found in other zombie games.

It’s a free shooting game, download it and become a legend, kill all the zombies and save the world!
fix some bugs.