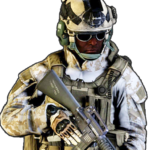 The empire is in risk of contamination and a new world war is approaching. The zombie virus or Z virus has been unleashed all over the earth infecting the vast majority of humans, leaving a small redoubt in a military camp, which you must grow and go to reconquer the territories invaded by zombies.

Establish the best strategy against the zombie invader and conquer each infected country step by step, exterminating all the enemy zombies and their buildings, but be careful, they have taken over robots and technology and are very well armed, causing the world be at war again.

Improve your camp collecting resources distributed throughout the territories after the initial world war (Iron, Wood, Oil and Bricks). With these four elements you can increase the construction of your buildings and equip them better, developing elite soldiers and robotic militia, leaving in your hands the end with the Z virus and all the zombies of the planet.

You have an initial tutorial to start the game but if you fall short, you can see a video tutorial also available from the same game.
Start to the War VS Zombie Conquest

Empire at War 2: Conquest of the lost kingdoms 1

Masha and the Bear: Climb Racing and Car Games 1.1.0