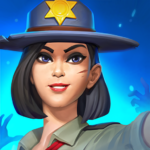 Zombie Blast Squad is a breathtaking new Action RPG with Match-3 based combat system and strategic elements. In a world ravaged by a zombie apocalypse, it’s time to command a team of superheroes and put an end to the mad genius, General Kreig!

– Easy to Learn, Rewarding to Master: your favourite Match-3 battles are enhanced by tactical combos, spells and weapons!
– Champions of Post-Apocalypse: mercenaries and rock stars, gunslingers and cyborgs… dozens of awesome heroes with special powers are yours to collect and level up!
– Loot, Collect, Upgrade: a unique resource called Flux can make your heroes even stronger!
– Discover and Conquer: an epic campaign of exploration awaits you! Fight through zombie-infested lands and defeat powerful bosses!
– Your Home, Your Fortress: base building is an extra game mode; expand a survivor camp and turn it into a post-apoc castle!
– Truly Amazing Graphics: every detail of this crazy world is delivered to you in a spectacular fashion!

Zombie Blast Squad is a free game of fighting for freedom and loot! Try it out now and lead the heroes to victory!

Follow us on Facebook: https://www.facebook.com/ZombieBlastSquad/
Fighters! A new game version has arrived! Here’s what awaits you:
– Chests on the campaign map: complete missions to get stars, then open the chests and get valuable rewards!
– Meet two new heroes — Tornado and Adder! And get ready to fight new zombie types!
– Updated base and reworked game interface will provide even more exciting gameplay!
– Lots of other new features, improvements and fixes!
Good luck!