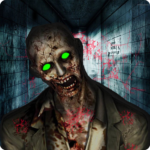 A dangerous Alien creature developed a powerful virus and spread into humans and convert to zombies.
Virus spread very fastly and infected other humans. Peace of the world is in danger. The war against the zombies has broken out and people are in danger of gory death. As a survivor and zombie killer make your way battlefield and kill the zombies through numerous challenges.Use modern weapons kill the zombies and restore the peace of the world and raise the sun of pleasure.
Aliens lost their basic emotions and infected the other people.The shooting is the only choice. The factory is under the control of zombies and alien creatures. They are walking everywhere. You will be surrounded by cluster of zombies. Load your modern weapon and clear the area by levels. Keep away from zombies and load you gun always. Safe your power of life. Don’t miss use of the bullets. Kill the zombies and get coins to unlock more modern weapons and a lot of bullets. So challenge yourself inside a zombie apocalypse world in this action FPS strategy battle! Enhance your arsenal of ammunition and weapons and face monster zombies shooting as an elite sniper hunter with the best guns and rifles in this dead zombie RPG FPS action combat game.
Kill all the dead and don’t leave any zombies alive!! Are you ready for all the action and adventure in this awesome shooter game? If you don’t want to be a dead, try your best in shooting and killing in wonderful zombie shooting games.
Zombie 3D Alien Creatures is Offline zombie hunter action Game and different from other Zombie dead games because of the real and realistic gameplay, a real excellent 3D graphics and light effects, different type of zombies and guns. As expressly, this Zombie 3D Alien Creature is offline game, you can hunter zombies whenever you want.
MIXTURE OF ZOMBIES IN OFFLINE HUNTER GAME
-This this Zombie 3D Alien Creature is one of the Zombie Alien hunter game with the majority zombie and Alien Creatures types and functionalities
-Zombie can be tremendously infected with the virus
-Aliens with a variety of killing abilities in the top offline game
MULTIPLE WEAPONS OFFLINE
-Hunter game with various weapons Ak47, Shotgun, Grenade, M4, Mp5 and etc
– Shoot zombies to survive in the world
– Discover combat moves in Shooting game using various guns
REAL EFFECTS IN ZOMBIE 3D ALIEN CREATURE
– Sniper game with a variety of guns those have different sound special effects to represent in real-life versions
– Enjoy 3D graphics with realistic lighting to present the apocalypse of zombie in the shooting game.