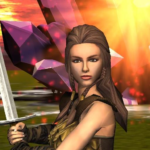 Did you ever have a dream to be a castle commander in defence game to understand how it feels to get on the battlefield?
Now your dreams come true!
Yeti village is under attack of strange creatures!
Yeti have to fight using all they have!

In this tower defense game you take yeti-size snowballs and magic under control to save yeti lifes!

Main features:
1) 3D 3rd person game, unlike other defence-like games
2) Every run is unique – enemy and bonuses timing is randomized
3) Level geometry changes over time – crystals are coming!
4) Cannon bullets ricochet on ground and rocks
5) You may play alone or build auto firing turrets and help them with your magic spells.