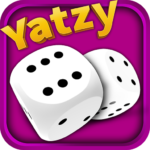 Yatzy – Yatzee by SNG is now available on Android mobile phones and tablets with its high quality game experience. You can now download the best Yatzy dice game for free.

YATZY is a board game with its original rules. Five dices with six sides and 15 sections to be filled in 15 rounds. It is a Scandinavian public domain dice game very similar to Poker Dice, Yacht, Generala and Cheerio. Yatzy is also known as Yachty and Farkle in different countries. You can play Yazy with your virtual buddies with high level artificial intelligence. Do not hesitate to play Yatzee with your make-believe friends. They are virtual but this prevents wasting precious time for waiting for live opponents.

This is a game of strategy and luck. Try to get the highest points possible by completing fifteen different dice combinations. Those combinations are one pair, two pairs, three of a kind, four of a kind, small straight, large straight, full house, and chance for the lower section and ones, twos, threes, fours, fives, and sixes for the upper section. And we have Yatzy, the mother of them all. You can play Yatzy solitaire or against an opponent. In single player, you choose your target points and try to score higher than that. Against an opponent, you just have to score higher than your rival.