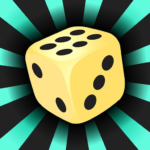 Yatzy 3D – Free Dice Game is a combination of Yahtzee, Dice, Strategy, Luck, Customization and real physics in a 3D simulation which is Free to Play and No Ads are shown. You can now download the yahtze dice game free. Yatzy Offline needs no wifi connection.

Yazy is a board game with its original rules. Five dices with six sides and 14 sections to be filled in a finite amount of rounds. It is a Scandinavian public domain dice game very similar to Poker Dice, Yacht, Generala and Cheerio. Yatzy is also known as Yachty and Farkle in different countries. You can play Yatze 3D – Free Dice Game offline without an internet connection

Coming in the next updates:

Play and analyze all the possibilities to get the best Yahtzee score possible. The gameplay is made as easy and straight forward as possible. With the use of real-world physics and 3D throwing dice the game is engaging and fun to play. The build-in SLOW-MOTION feature brings more excitement to the table as it kicks in when you are only one dice away from throwing a Yahtzee.

Customization is a huge part of Yatzy 3D – Free Dice Game. You’ll earn in-game currency with every game played that can be used to unlock colors for your dice. You can unlock a lot of different colors for your dice including special colors that can only be obtained with “Tokens”, which you’ll earn from throwing a Yahtzee.

Each round you can roll five dice up to three times to achieve one of the 13 combinations. Each combination must be done once except for Yatzy. The objective is to achieve the highest score possible at the end of the game.

A more detailed explanation of how the Yatsy 3D – Free Dice Game scoring works can be found in-game.

Note*
This Free to Play Yahtzee Dice Game is still a work in progress, feedback would be much appreciated.