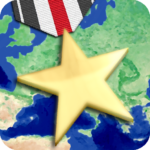 WW2 Command Lite is a strategy war game set in World War II. Command your army and achieve a military victory! It is made by the creator of the strategy game Nations in Combat.

* Command an army in the second world war
* Hotseat Multiplayer: Play against a friend on the same device
* Use the right strategy, tactics and the terrain for your military operations
* Conquer cities to get a reward
* Buy more units and choose from infantry, cannons, vehicles and aircrafts
* Play historical based scenarios and battles from WW2
* Play quick matches on randomly generated maps

Can you become a successful general of World War II ?
– Added mission briefings for scenarios and preview maps
– Unit effects are now displayed in the top panel
– New combat modificator: Encirclement (units which have atleast 3 enemy troops directly next to
them are now considered as being encircled, which gaves them a defense malus)