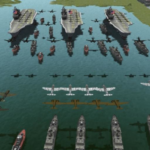 General, lead your armies to the victory in World War 2 pacific battles.

This is a free RTS game and World War 2 simulator for android devices which is for free. It is very easy to play. You just need to choose the troops, planes or battleships you want to deploy and Tap on your zone in the battlefield. Remember that if you click on enemy side of game, simply nothing happens.

The Pacific Ocean, during World War II, was a major battlefield of the war between USA armies and Japanese forces. It was defined by the Allied powers’ Pacific Ocean Area command, which included most of the Pacific Ocean and its islands, while mainland Asia was excluded, as were the Philippines, the Dutch East Indies, Borneo, Australia, most of the Territory of New Guinea and the western part of the Solomon Islands and Japan. There are so many fierce battles between two forces. All begun with an immerse attack of Japan and ended with nuclear bombs of USA to Hiroshima and Nagazaki which claimed lives of hundreds and thousands of people.

Free form quest map that allows players to decide when and where to fight within a historical framework.

More than 20 different units all accurately researched and carefully modeled in amazing detail.