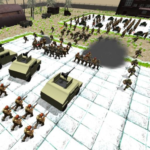 Enemy has almost the same power as you have. So deploy your army and units carefully. You can see the deployments of your units and enemy units by clicking on “3D View”. You can purchase enemy units by spending your golds.

It is quite simple. You have your money to purchase units. Select the unit to buy and click on box to deploy. Click on “3D view” if you would like to see army deployments. and Click Start Battle button. You can move camera on battlefield
Bug fix,
Game Size Reduced