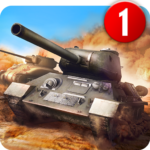 Throw yourself into the center of an epic WWII tank battle with FREE tactical strategy game World of Armored Heroes. Take command of a military base and form a tank brigade from hundreds of historical combat vehicles with unique crews.

Command your tanks and occupy enemy regions in a full-blown single-player campaign. Join up with your friends and form divisions to take part in exciting events and joint enemy destruction in PvP. In this military strategy game, the size of your base or the power of your tank armada are not the only things that matter — don’t forget about battlefield tactics!

Experience historically accurate vehicles from the three World War II powers: the USSR, the Allies, and the Axis. Unlock new war machines and upgrades, recruit and train a crew with unique skills, and form a tank squad that suits your personal strategy. Upgrade your equipment to build the most powerful killing machines and wreak havoc among your enemies. Use different combinations of military equipment to outmaneuver your opponents in PvP battles and to complete diverse missions in campaigns: from scouting vehicles and light tanks to heavy tanks, tank destroyers, and self-propelled guns. Use mines, aerial reconnaissance, artillery, and air support to change the course of the battle.

Command your HQ
Build and improve your base for research, reconnaissance, army and crew training, and additional rewards during the war.

Variety of historical equipment from WWII
Explore and build combat vehicles that fit your personal strategy. More than 100 real World War II vehicles of different countries: the USSR, the Allies, or the Axis.

Customize your WWII military equipment
Unlock upgrades and make your tanks more powerful. A wide arsenal of shells to destroy enemy vehicles spectacularly. Fill tanks with the best fuel for greater speed and supply them with repair kits.

The best WWII tank crew from around the world
Recruit and train the best tank crew for your army. Improve skills, retrain crew members, and assign them to the vehicle that best matches their strategy. Form the most perfect crews from all over the world!

The importance of divisions
Create your own division or join an existing one. Invite friends and make new ones. Help each other with resources and combat reinforcement in the war, and enter in tournaments. Take over the world together!

Exciting single-player campaign
Complete hundreds of quests to occupy dozens of zones in a campaign featuring an epic storyline. Command an army to complete a variety of quests, from defending artillery and holding positions to destroying enemy fuel depots or an entire base. Feel like a WWII General!

Defend the country
Explore new territories in exciting events and scan previously captured territories to detect the enemy near your base. Destroy them all to get rewards!

Various online PvP modes
Fight against players from all over the world in dynamic PvP battles. Conquer the deathmatch and arena leaderboards. Join divisions and help your team become tournament champions. Be the best!

Daily bonuses
Log in to the game every day for different bonuses and complete quests for additional rewards. Use all the resources you can get to become the best tank commander in the world!

Looking for a game to play? Try the strategy game World of Armored Heroes!