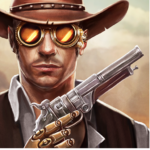 Gunfighters unite. Master the epic battle of men versus machines, dive into a steampunk world of steam and machines. Serve and protect your hive. Dominate the wild west! DOWNLOAD this strategy game on your mobile now!

【Gunfighters Unite】
Dead or alive? Unite with your local gunfighters and ally against the machines. Form your alliances and join forces for the epic battle of the wild west. Strategy and resources are fundamental, but without allied troops your empire will fall soon. Form invincible alliances and destroy your rivals.

【Steampunk Factories】
Steampunk technology is all around. Research and develop powerful weapons with futuristic factories. Mine the needed raw materials and grow your production facilities to the maximum. Equip your gunfighters with weapons. Only armed troops survive the battle of the wild west.

【Destroy your Rivals】
Resistance is futile – you will be assimilated! Serve and protect your alliance and fight back hostile drones. You can never trust the machines, but your outlaw rivals are even worse. They steal your raw materials, take over your steampunk factories and kill your loyal gunmen. Prepare now for the epic showdown of the wild west.

Do you love STEAMPUNK atmosphere?
This is the strategy game No.1 for you!