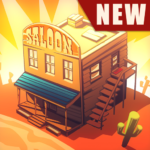 What else is there in the great ol’ West than tumbleweeds, ya say? Big money, we say! ?This is your chance to become the almighty billionaire tycoon you’ve always dreamed of!

Wild West Saga is an addicting free-to-play idle (incremental) game tailored to satisfy your rush for thrilling profits and money! It’s more than just an idle clicker, where you wait your cash to grow. Craft your unique killer strategy and venture off the beaten path to becoming a capitalist of the West!

Embark on a legendary Wild West adventure, manage and maximize your resources to build your own capitalist tycoon empire! The key to this adventure is to keep progressing and the cash will start pouring in, in no time ?

Survive the apocalypse of simulation games and incremental clickers and zero in on this one. One of the most infectious addicting idle clickers out there! ?

✔️Manage and upgrade up to 20 different businesses to! Open a caravan service or dig for precious gems! There’s cash everywhere ?
✔️Not a big clicker? Hire outlaws to maximize business and resource management to increase your profits. Who you incorporate to your hired crew is key to growing your capitalist empire ?
✔️Unique tap mechanisms that instantly double your profits. Keep on tapping ?

✔️Be a Hero! Tap to complete tasks and win cash rewards. Hundreds of Heroic Deeds are waiting for you to achieve!?
✔️Reset! Every time you achieve the set growth goal for each town, progress to the next one?
✔️Use our Map to traverse the West with your caravan! No worries, it’s a war-free capitalist adventure ?

✔️Collect rare Patent Cards to boost your businesses’ idle profits ?
✔️Never be grumpy! Incremental offline progression that grows your idle empire while you kill your time ?
✔️Play offline without internet! You only need internet to reset ?
✔️Tap to claim your daily reward bonus ?
✔️Catch the Loot Bag for money ?
✔️Make money even when you sleep! ?

✔️ Complete Achievements and claim more than 70 Gold Trophies ?
✔️ Wear your headphones when tapping! Our game incorporates original killer music that will click with you ?
✔️Start a Family ??, grow cash, and climb the Leaderboard ?
✔️Cross-Platform available! Carry your progress with you anywhere, anytime! Zero chance of losing progress ?

?Bill, is an adventurous capitalist with prestige and ambitions to build an empire. Of course, he’s neither evil nor has a devilish plan to do so; just an industrialist aiming to invest in profitable corporations.” He started out as a poor lumberjack chopping woods near a river; soon he got infected by the virus of gold prospecting. Luckily for him, he did find a gold deposit that allowed his industrial empire to skyrocket. His story is a typical American example of “when life gives you lemons, make lemonade.”

?Jenny, our cowgirl, was a legendary Can Can dancer, amusing people of the rich society. In her free time though, she was a writer. Her most famous work is:?“A Gun for Hire.”? Her hero, Jack, a war survivor was killing targets for money, living the life of a sinner; Bounty Hunters would soon hunt him everywhere, leading to a wild hunting turmoil. She fast became extremely wealthy and pivoted her career path; she’s now the prestigious owner of the “Jenny Inc.”, the largest mining business on Earth. Talk about a “from zero-to-hero” story, huh?

To many, Wild West seems like an apocalypse or a zoo. They think of it as the era of easy money, gold diggers, miners, colonies, and wars. We think it’s not a zoo but rather a mine; a mine home to epic stories and treasures waiting to dig them out ?

?So, what you are you waitin’ for? Click and hop on the caravan! Giddy up, build an empire and become a legendary tycoon
– Addressed some rare occasions of game crashes
– New Feature: Henceforth, you’ll get 30 Gold coins with your Daily Login reward!
– Other fixes