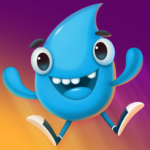 Way Home: Stack Jump is a fun arcade game by a Belarusian developer.
It so happened that the main character, Rain Droplet, was lost and was in the very center of our planet. We must help the Hero to go back to the clouds. You are waiting for a difficult road home, through the core of the earth, the bones, sewage, city, forest and other obstacles. In the game there are 10 characters from different liquids: dirt, oil, kissel, resin, syrup, lava, mucus and others. Choose your character and take him to the top of the tower!
Jump on the blocks to build a tall tower out of them and climb higher and higher. Put the blocks on top of each other exactly and get more points. Build the highest tower you can! The game is different from the rest with nice graphics and soundtrack.
– does not contain advertising
– does not contain donate
– everything is absolutely free
– Play and enjoy!
Hello! I leave for you a report on the new changes:
– made the passage of the game, now it’s not just a jumping-off, it’s a jumper with a meaning) You need to go home, to the clouds, from the core of the earth. Brilliantly same)
– made small effects. looks like norms) as you?
– added 10 characters. We are waiting for your opinion on them.
– added 50 awards for different achievements in the game
I’m waiting for your advice and suggestions for the next update.