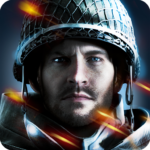 War of Justice is a Real-Time strategy war game. The player will take upon the role of a leader of a small team. Build your own main base, train your troops, recruit legendary heroes and join your allies in the military modern war. To befriend or to plunder, the choice is yours!

The technological revolution achieve leapfrog development. Government’s authority is gone, social resources are reallocated. By means of violence, a illegal organization attempts to master core technologies in order to seize power. Global War is on the verge.

-Global Military Modern War
More weapons of war are being developed. There are even anthropomorphic weapons of war you can seize. Lead your country back to greatness!

-Build Your Wasteland Territory
You need to build a base camp first. Upgrade your facilities, research your technologies, train your troops and recruit powerful heroes to strengthen your territory.

-Strategic Gameplay
You have to know your enemy and yourself to walk the battlefield of this world. Be wise, firm but careful and get more support.

-Diplomatic Allies
You have to use diplomacy to get more support. Whether it’s going against different terrorist groups, or fighting for the title of the president, your allies will always be backing you up, as long as you find the right people of course.
*Game optimization