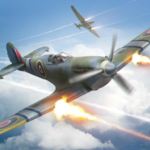 War Dogs is a world war 2 era air combat flight simulator game featuring 24 aircraft from the five major powers of the time- USA, Germany, UK, Japan and Russia. The game features the full diverse range of aircraft that were used in the great war- dog fighters, dive-bombers, torpedo-bombers and long range heavy-bombers. The game has both single player campaigns and multiplayer arena battles spread across five major theaters of war ranging from the deserts of North Africa to the shores of Japanese isles

War Dogs is built from ground-up as a flight simulator to offer the most immersive air combat experience, and unlike most air combat games on Mobile, War Dogs has both Arcade and Simulation grade controls for both rookies and experienced Ace Fighters. Take control of all three controls(pitch, roll and yaw) to pull off basic and advanced air combat manoeuvres like Barrel roll, Pitchback, Wingover and others

Beneath the Rising Sun(Japanese Campaign): Spearhead the historic assault on pearl harbor that pushed USA into the World War 2. Decimate the American pacific fleet with air-strikes on their warships, aircraft carriers and other key installations using Mitsubishi A6M Zero, Nakajima B5N and others airplanes

The Motherland Calls(Russian Campaign): Witness an entire nation mobilized to defend their motherland from the German blitzkrieg. Use the crippling winter in Russia to immobilize the German Wehrmacht and disrupt their supply lines. Deploy Iconic Russian aircraft like Ilyushin IL-2, Yakovlev Yak-3 and Petyakov PE2

Multiplayer: Invite your friends and Battle out with them in Arena style Team battles. Choose your squad (2 Fighters, 1 Dive bomber, 1 Torpedo Bomber, 1 Heavy Bomber), and deploy them. Face off against Anti-aircraft Guns or Fleet of Battleships in Land and Sea battles while defending your own assets. Play either in flight simulator mode or arcade mode depending on your style. Become a Ace fighter by leveling up and upgrade your aircraft