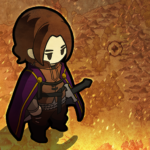 UNCROWNED is a real-time strategy game set in a fantasy world based on medieval Europe, focused on battles where over 200 soldiers and characters known as heroes engage in the fight.

Spurred on by their desire “to play a more strategic game”, the developers created a game where players can skirmish over keeps and take over maps and a variety of geographical features such as forests, bridges, open fields, lakes and hills. In this innovative game, players can enjoy the greatest in mobile strategy gaming.

Not only does the game offer short recreational battles, it is also bolstered by aspects from simulation games, as players can spend their time gradually developing their territory. The player, who is a lord of this medieval fantasy world, must recruit many heroes and seek to make their name known across the land.

■Expand your territory and train your heroes!
Train the heroes you have recruited so they are more effective on the battlefield! Adjusting gear, receiving gifts from heroes, opening treasure chests, expanding your territory… there is so much to do!

■Triumph on a variety of battlefields!
Play with players from across the world! Soldiers and heroes enter into battle and whoever takes control of the most keeps is the victor! Not only swordsmen but mages and archers too, all sorts of heroes meet on this intense battlefield!

■Recruit heroes at the tavern!
Go for a post-battle drink and meet heroes! How much silver you offer is up to you…?