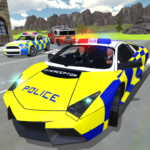 Fight city crime and help protect the city in fast cop car driving in one of the best police simulator game!

Explore the huge open world city environment in search of car crime, race to accidents helping people, escort ambulances, and much more to be the best city police officer. Answer the police radio to accept the call out and uphold your cop duty and serve justice to the city.

Take to the city streets and drive real police cars. Drive police cars through the city or go offroad across the massive world filled with incredible locations like airports, dockyards, farms, and hidden Japanese temples. Miles of the open road to drive on and explore as an on-duty police officer.

As the newest police officer on the force, patrol the city and take on criminals in tough police vs robbers action. Arrest criminals and bad drivers committing crimes.
Complete all-new unique missions to rise through the police ranks and unlock faster, top of the line police cars.

!! Play for hours with UNLIMITED levels to play in UK Police Car Crime Driving !!
One of the best police car driving simulator games on the store!

Example of missions to increase your rank, and get the highest ranked badge :
– Chase and arrest dangerous drivers
– Drive fast police cars with no limit speed
– Arrest criminals in police vs robbers chase action
– Protect and escort important vehicles like S.W.A.T vans, ambulances, and V.I.P limos
– Race to the scene of the accident to help victims
– Call and respond to car crashes and accidents

Adjust the graphics quality play without lag in options to enjoy gameplay with no issue.

Drive in style with fast police car interceptors, rise the ranks and unlock even better cop cars to uphold the law in the city. Help stop crime in the all-new, one of the best free police car driving simulator games on the marketplace!