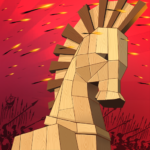 In Greek mythology, the Trojan War was waged against the city of Troy by the Achaeans after Paris of Troy took Helen from her husband Menelaus, king of Sparta.

The game simulates this war. You lead a Greek army on the way to conquer Troy reclaim Helen. Going through each territory you will receive more types of troops, using coins to equip artifact off god to increase strength. In each battle you have to balance food and training troops, use trojan horses as a fort for defense, or use the magic of spell books destroy the enemy Tower.

Key Features:
– Control army behavior according to the command flag
– Control the soldier unit with the touch joystick, using their own unique skills
– Level-up and equip yourself with powerful equipment to increase your stats
– Magic Book – Twelve Olympians God’s spell
– 5 set artifacts of Gods, upgrade armor, use their special power
– Explore the ancient world in Greek mythology
📌 Chapter 2 : Wrath Of Poseidon
📌 14 new stages and new opponent characters
📌 Possible to preview any Artifact from menu screen