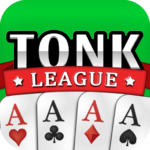 Tonk, also known as Tunk is a kind of knock rummy card game enjoyed by thousands of card players in the USA. The Tonk League game has all the rules of the original tonk (trunk) card game and exciting multiplayer game play online.

Tonk League is on its way to becoming #1 and already is the Play Store’s fastest growing FREE Multiplayer Family Card Game Online ranking in top 50 in U.S. Card (Games) !

5 Reasons to WHY Tonk League is #1 Gin Rummy card game
1) Play with REAL people from across the US and world
2) All the top Tonk players play our game
4) High stakes Tonk game – 5000+ coins per games
5) Hundreds of players online.

Important Disclaimer: Tonk card game is for FUN and amusement purposes only!

Play
1) Normal turn consist of two parts :
a) Draw – You must begin by taking one card either the Face Up or Face Down pile
b) Discard – To complete your turn, one card must be discarded
from your hand

2) The goal of the game is to get rid of all the cards by spreading Sets or Sequences.
3) Also you can get rid of cards by hitting opponents Spread

1) If anyone knocks, the player with least points wins.

2) If you put down a new SPREAD, you cannot knock on your next three turns.

3) If you hit someone by adding a card to their SPREAD, then you cannot KNOCK at your next turn.

4) You can also win by getting rid of all the cards. Anytime that you have no cards in your hand, you automatically win without needing to KNOCK.

End of the play

1) Any player whose initial hand contains 49 or 50 points wins the game automatically and is paid twice the basic stake by each of the other players. If more than one player has 49 or 50, the hand is a draw – there are no payments

2) Any player who gets rid of all their cards without a final discard wins the game and is paid a double stake by each other player.

3)Any player who runs out of cards by discarding their last card wins the game and is pais the basic stake.

4) When you KNOCK and if you have the lowest point count, then you win the game.

5) When you KNOCK and if you DONT have the lowest point count, then you loose the game and you pay twice the basic stake to everyone who has an equal or lower count.

6) The stock runs out. The player with the lowest count wins the game.
We’ve worked on improving the overall performance of the game. Tonk on!