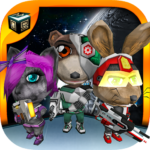 Tiny Commandos is a infinite Third Person Survival Shooter game , It has been designed for fans of the best 3D action games and 3D shooter games . You’ll have to fire your weapon and kill Aliens to overcome the difficulty levels using assault weapons and power ups .
There will be more than 20 different types of weapons and power-ups you can get along the game level from enemys and supply crates . You can use this rewards items to get the best Achievements and Scores in Google Play Game Services and be the best player in the best infinite survival alien game .

– 3D Characters , they looks cute and tiny toon , but really they be a killers .
– You can select between 3 tiny toon animal commando , Each commando has been specially designed with different special abilities .
– The difficulty increase along the level and each level appear different alien types .
– Collect weapons and power-ups to upgrade your character .
– 12 different weapons with spectacular fatal shootings .
– 6 different power-ups to improve the health , armor , speed , damage , shield and lives .
– If you panics or has too many enemies use the mass destruction button to kill everything .
– Buy robotic Pets and upgrades to help you commando to overcome your records .
– Support Google Play Game Services with 29 types of achievements and 2 ranking leaderboard .
– Spectacular 3D graphics and sound effects care to detail for you .
– Músic by Alextrackone : www.Alextrackone.com .

– Left pad is for player movement .
– Right pad is for fire weapon and fire direction .
– Right secondary button is for A.O.E weapon .
– Use small camera button to take screenshot and share with your friends .
Minor bug fixes.