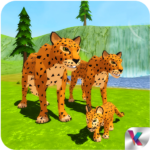 Fusion of animal simulator games 2018 in low poly wild adventure forest. The Leopard Online Simulator in Fantasy Jungle is specially made for the lovers of wild animal games. Play this online multiplayer leopard game with your friends. Be a snow leopard or forest leopard and join most fearless snow leopard pack or clan in the entire forest. Fight against other wild animals and survive in the wilderness of fantasy jungle in leopard family survival simulator. Raise a snow leopard family in the family simulator game. Breed cubs in new RPG adventure and survival jungle simulation action game. Unlock or purchase unique skins and power attacks and magic powers and use them while fighting against jungle predators. In leopard fighting games, start fight and hunting for survival of your leopard family against other wild animals like jaguar, ice bear, scorpion, ibex, rabbit, tiger, lion and many more wild animals in wild leopard sim 3d.

Use your magic attack powers while fighting with other animals for quick hunting and killing in wild animal games. Fight like a real leopard in best of leopard games. Live the life of a wild, vicious snow leopard, and lead your prowl as you look to slaughter any creature that crosses your path. Hunt and bring down other wild beasts and start hunting prey like rabbit, duck and snake as a big cat of forest. Use your hunting skills as you turn other jungle predators for leopard family in this leopard simulator. Ultimate fighting in the missions of leopard survival and leopard family survival against panther, lion, cheetah and ferocious tiger. Check your attack strength with your attacks including, bite, claw or pounce and other magic fire ball automated power attack for instant kills.

Features of The Leopard Online:

Bomb Me Brasil - Let's Rise Up