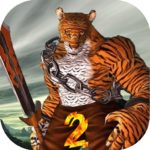 Do you like fighting games? Do you enjoy engaging in life or death duels against dangerous street fighter? If you do, try our newest FREE action game: Terra Fighter 2 – Fighting Games! Arm yourself with various weapons and face off dangerous enemies in battle to death. Train yourself to be expert in kung fu fighting and MMA fighting to be able to defeat your enemies! Only a real warrior with a brave heart can enter our death arena. Are you ready to start this addictive and exciting action game?

Terra Fighter 2 – Fighting Game is sequel of “Terra Fighter – Deadly Wargods” action game. Terra Fighter 2 gives you a chance to use various weapons to defeat the bad guys. Test your karate skill and land Kick, Punches, Combos and Powerful Projectile on your enemies to kill them. You need to have fast reaction with quick thinking to be able to master all fighting styles such as kung fu fighting style or MMA fighting style.

• STORY MODE: Start your journey as a warrior. Fight the evil Cibor and finish off his entire army.
• DUEL MODE: Face off against deadly enemies in death arena. Unlock all 16 opponents with various kung fu fighting and karate skills.

Remember that each street fighter has its own weaknesses and strengths. Each battle is different, so stay focused when you play our action game.

Note: Terra Fighter 2 is free to play but you have the option to upgrades weapons and armors with in app purchases. The upgrades help you in your battle.

If you like this game please take a moment & rate us. Your ratings inspire us improving the game play. And stay Tuned with SMVD Games @ https://www.facebook.com/smvdgames/
In app Purchase Issue fixed and video coin issue resolved