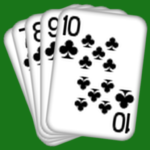 Ten is a new trick taking card game that has similarities to Euchre and Spades. If you enjoy playing Pinochle, Bridge, Hearts, Whist, Pitch, or other card games, you will love Ten! Mastering the strategy and twists that you will encounter playing Ten takes ingenuity and persistence, and you will have a ton of fun playing this new card game.

This app includes a detailed description of how to play Ten and tips that popup during the game to help players learn the game. It also includes numerous settings, unlockables, and statistics related to your play.

Although Ten is a fairly complex game, the skills to master it are attainable for new players. Ten is designed to reduce the influence of luck as much as possible. Similar to Euchre, the game begins by bidding to determine the trump suit and the declaring offensive team. The play is also similar to Euchre: any card may be lead; you must follow suit; if you have no cards in the suit led, you may play any card; the winner of the trick is whomever played the highest card in the suit led or the highest trump card. The scoring is a unique mix of Euchre and Spades: the team that won the round (either by making the bid or setting the team that bid) gets points, and the other team gets no points; there is an immediate penalty for going over your bid.

Enjoy this free app to learn and play Ten, an exciting new card game that will provide you hours and hours of fun!

Check out other card games from this Developer: Euchre, Five Hundred (500), Whist, War
Fixed a bug with the stats.