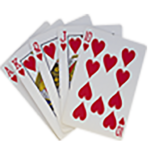 Tarneeb is a game for two teams, each team consists of players sitting opposite one another on the playing table, using one set of playing cards 52 the direction of play counter-clockwise. Each player’s mission is to try to estimate the number of Allmat (dishes) that his team can be obtained in each round

How to Play:
The player who won the bid to declare Tarneeb then throw any type of paper on the floor and the other players must throw papers of the same type starts, wins Bamh His top sheet and the next sheet by throwing winner

The tour ends at the end of the players leaves

If the team managed to get this number, the number is added Allmat they got their points to the other team does not take any points

If the team did not succeed to obtain this number, are raised from their points are added and the number of Allmat obtained by the other team to their points

If one of the two teams at the request WIG 13 and did not succeed to obtain them, it will be deducted 16 points from the total points