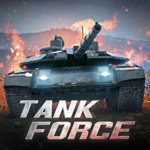 Millions of players from around the world fighting on the best modern tanks.

So what are you waiting for?
Forget about such boring things as racing, killing zombies and wasting time on clickers!
Realistic online battles on heavy war machines and its modifications are available in Tank Force right now!

Join the world of modern tank battles:
– Cross-platform online PVP battles 7×7
– Fight till the total annihilation or capture the base
– Upgrade and customize your own tank
– Wide range of modern tanks and wheeled war machines
– Realistic combat arenas that represent different geographical zones
– Take several tanks into the battle
– Play against the advanced AI and real players
– Different types of armor zones

Many players from around the world.
Became a part of a growing community.
Join online battles with your allies and fight for your country dominating all others.

You’ll get:
– Realistic physics
– Excellent graphics and sound
– Destructible environments
– Attention to details
– Participation in the life of the project and the community
– Brand-new solutions in the world of tank blitz battles
– Ability to play on your PC and your phone

You can get all that in one game – Tank Force, a free online mobile tank shooter.
3.8 Update

* The point capture system has been reworked and returned to the game.
* Capturing a point does not end the match and gives a positive effect on the whole team
* Capture time reduced
* Significant changes in mobile aiming
* Multiple game interface improvements
* Multiple bug fixes
Details in the Games community: https://www.facebook.com/TankForceOnline/