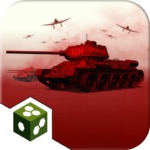 Tank Battle: East Front is an exhilarating turn based strategy game from the creators of Tank Battle: 1944 and Civil War: 1863. Use hex based tactical combat to dominate foes on the Russian front of the Second World War. Fight as the Germans or the Soviets in a series of ever more complex missions. The Eastern front of World War II saw some of the most ferocious fighting, as the Red Army and the Wehrmacht pitted ever more powerful tanks against each other. While the early years of the war saw the Soviets struggle to withstand the German Blitzkrieg, the later stages saw the Red Army counter-attack in great force. Missions vary from straightforward wipe out the enemy scenarios, to capturing key objectives, to protecting vital supply convoys and constructing bridges to assault the enemy. There are a whole range of objectives to reflect the tactical complexity of warfare on the Eastern Front, and conquer your enemy with over 110 historical units.