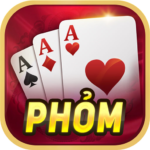 Tala, Phom Offline (Phom Ta La XoViet) is a Vietnamese Rummy card game called “Phỏm – Tá Lả” played with a standard deck of cards. The objective of the game is to exchange cards in a hand to form combinations of cards called Phom Tala (phỏm) and to reduce the number of points left in the cards that are not in any Phom (phỏm). This variance of Rummy is played throughout Vietnam, though it is much more popular in northern provinces of Vietnam. Ta La, Phom Offline is for 2-4 people and it is best to play the game with 4 people. In Tala, each player initially has 9 cards except the first player who has 10 cards. The remaining deck of cards is left in the middle of the game table.

*Download Ta La, Phom Offline and free to play anywhere (no internet required). We hope you enjoyed it and don’t forget to rate 5* or review us on Google Play Store.