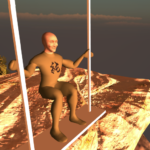 This game is a fan game of Japanese Youtuber Junichi Kato, a swing simulator implemented by a physics engine.
Operation is difficult, but with practice you can row like a real swing.

The game’s flow is simple.
Just,You row a swing and just jump when you accelerate enough.
And you can open the parachute while flying.

this game can use a help function that mimics the comment system of the Japanese video site Nico Nico Douga.(Unko-chan had been posting videos on Nico Nico Douga for a long time before becoming YouTuber, so he and this website are closely related
)
With this function the comment will flow on the screen, and if it hits the character, the character will accelerate.
After opening the parachute, you can stream comments on the screen by pressing the comment button.

If you have mayonnaise, the barrage comment button will be enabled.
Unko can make a loud voice by ingesting mayonnaise, and a lot of comments are triggered by the loud voice.
Mayonnaise sometimes falls from the sky in Standard and Challenger modes.
In short and standard modes, you have one mayonnaise from the beginning.
Practice a lot and aim for a high score!!

Currently the only language available is Japanese, but I hope to support English someday.
– The acceleration at the time of comment hit has been readjusted.
– Because the above adjustment has an effect on the flight distance, the reference of the ranking changes from this Ver.
– You can now change the swing length in training mode. When you select a training mode on the title screen, a button for changing the length is displayed to the right of the swing length.
– Fixed a bug that images were not displayed correctly in the tweet function.