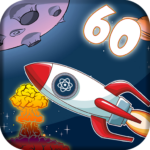 Imagine you are space wolf… And now imagine that everything will blow up in 60 Seconds! Hurry! Take all you need for survival in open space and jump to the shelter… I mean, shuttle! Shuttle takes you 60 parsecs from the nuke! Magic of numbers, isn’t it?

Let me introduce captains Adams and Evie. Take control of one of them. Your mission was to investigate open space, but suddenly you’ve heard an alarm of apocalypse. Everything changes from that moment. Become a friend of foe!

Features of Survival for 60 Parsecs:
– Two types of game interaction: arcade(take everything to shelter), quest (survive with everything you’ve took on the previous level);
– Two heroes: Captain Adams and Captain Evie – chose your;
– Dozens of sci-fi survival objects, which help you to destroy everything in atom.

The game is still developing and we are extremely grateful for any feedback here or in any social network! Let survival begins! You have only 60 seconds before apocalypse… Nuke! To the shelter!… Khm, shuttle!
New in Survival for 60 Parsecs:
– Level spaceship: you have 60 seconds to jump to shelter (shuttle) before the nuke;
– Level quest in space: you all stuff wisely. Survival begin!
Let the apocalypse begins!

The Wizard of Oz Magic Match 3