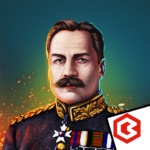 Choose your favorite nation during WWI and assume the highest office in your desired empire. Balance the production of materials, troops and weaponry with the rare resources your land has to offer. Form alliances with your competitors, do important trade deals or fight yourself through the 1st World War scenario you are challenged with. This rough period demands a valiant leader like you. Ensure your peoples survival, train them to join their brothers in arms on the battlefields on foot, as cavalry or even place them into the first experimental tank. Develop your country and slowly conquer the world.

“Immersive Strategy – This is not a game that you play once and forget; the world map is huge, and the options available are vast. Your game may go on for months at a time!” 9.3/10 – MMO Games

“Supremacy 1914 seems pretty interesting and will definitely be one of your favorites if you like this genre. There is also role playing going on which will make you feel at home.” 8.6/10 – OMGSpider

Veteran grand strategy players will see their strategic skills be put to use on the battlefields in this huge World War I game, battling with economy, armies and the ever growing threat presented by your opponents. Play as Wilhelm II or change history however you want. In Supremacy your imagination and skill are your only limits! Up to 500 players can compete in real time on historical and fictional scenarios.

If you are an existing Call of War or Conflict of Nations player, feel free to use your existing account to play the game!

S1914 is free to download and play. Some game items can also be purchased for real money. If you do not want to use this feature, please set up password protection for purchases in the settings of your Google Play Store app.
We are very excited to bring sound and music to Supremacy 1914! Yes, you read correctly! The new Supremacy 1914 soundtrack will immerse you more in the game than ever before! Hear the action on the map and listen to your troops fight for victory!