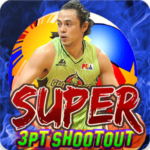 Shoot as many 3 pointers as you can within the time limit. Let yourself be known! Compete with other players and dominate the weekly leader boards!

PBA Super 3 Point Shootout is an arcade game that pits players against players to prove who can score the most three pointers. The game sports familiar control that allows players to move around the court and shoot beyond the arc.

———————————-
Ranida Games is the OFFICIAL game developer of Philippine Basketball Association (PBA) and the developer/publisher of the hit game PBA Philippine Slam.

For comments and suggestions you can email us at
info[at]ranidagames.com
Latest updates!