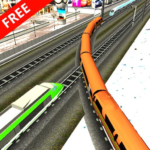 Subway Train Racing 3D 2019 a realistic train Driver game, be a train driver and go to the train through the Europe. Drive the popular commercial trains around in a very well constructed android game.

Subway Train Racing 3D 2019 is the first high – quality subway train driving game, you can select between single player and a multiplayer mode. Race along with real-time players from around the world in multiplayer mode.

Every completed level will give you coins, through which you can update your trains or buy new trains. Each level has different set of challenges, in some levels you have to pick and drop passengers and in some you have to transport goods and cargo. It has realistic 3D environment, different routes along Europe, unique trains, signal crossing and many more.