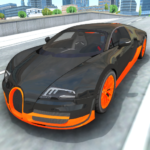 Car racing games don’t come much better than the latest in racing simulators. Race against other vehicles around the city streets, unlock faster sports cars to drive, drift, jump, and smash into traffic in the all new open world racing car driving simulator!

Street Racing Car Driver is one of the best racing car games for Android!

Want to feel the experience of driving in realistic racing car game? Turn the key in the ignition and start burning tire rubber as you go from 0-60 in no time, perform drifts, stunt jump, and wreck your car with realistic vehicular body damage. Witness in real time every bump and scratch with each new car crash!

Get closer to the action like never before in massive open worlds from one of the best car driving simulator game experience! Race your fast sports cars in multiple big cities, perform tricks and stunts, and cause disorder! Experience the most realistic and extreme car driving game out now!