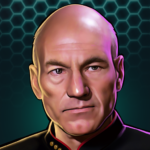 Red Alert! Prepare for battle in the Star Trek Adversaries digital collectible card game. Collect, engage in card battle combat and test yourself against the most fearsome adversaries in the Universe.

OVER 100 3-D SHIPS: Captain your own unique Flagship in a fast paced, ship versus ship strategy card game.

CREW YOUR SHIP: Collect cards and construct your deck to enter battle with Ships and Crew from all your favorite Star Trek shows, featuring over 150 Crew with signature audio.