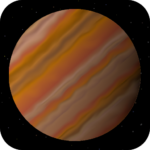 Space Sandbox allows you to create your own universe populated with comets, planets, moons, gas giants, stars, and even black holes. Watch as the celestial bodies orbit each other and collide in fiery explosions. Design everything from simple solar systems to massive galaxies. Save your favorite universes and change them later.
Thank you for 100,000 downloads!

This update contains lots of changes:

– At the request of many users, all bodies now pull on each other.

– You can now populate your universe with red and blue stars

– The UI has been modified to take up less of the screen.

– Ads now occasionally display during transitions in the game.