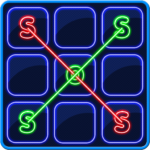 SOS Glow is a two player game played in a 2D grid. It is similar to tic-tac-toe and dots and boxes, but has greater complexity.

Players take turns to add either an “S” or an “O” to any square, with no requirement to use the same letter each turn.

The object of the game is for each player to attempt to create the straight sequence S-O-S among connected squares (either diagonally, horizontally, or vertically)
Once the grid has been filled up, the winner is the player who made the most SOSs.
If the grid is filled up and the number of SOSs for each player is the same, then the game is a draw.

SOS Glow is perfect time passing game in a cool glow design.
Try to beat your opponents and compete on the leaderboards.

Get Ready to recall your school days memoroies!!

Fishing for kids and babies