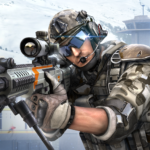 Snipe your targets on epic 3D battlefields! The first person shooter game that puts you behind the sniper rifle.

Strike back and take action on the battlefield with the best snipers in the world! Sniper Fury puts out a call for the best snipers to take aim at evil, wherever it hides. Battlefields across a variety of regions will let you shoot through any environment, each with unique challenges.

Cross fire on the battlefield with stunning 3D graphics. Equip sniper rifles and automatic assault weapons to accomplish your missions. Shoot guns and upgrade them with unique customizations to make weapons like no other.

First person shooter gameplay puts you behind the sniper rifle. Get your adrenaline pumping with this realistic action and shooting simulator.

FPS players from around the world compete in Sniper Fury. Assault opposing clans and earn your place on the leaderboard! Strike at the enemy and enter the top game league to prove your mettle on the battlefield!

Aim & Shoot – there’s no room for remorse in Sniper Fury.

PVP BATTLEFIELD
• Cross fire & steal resources from players in PvP.
• Build a shooter squad and protect your base.

SHOOT GUNS IN THE BEST FPS LEAGUES
• Shoot for the high score and aim to enter the top game league!
• Be the best sniper on duty in this shooting game – only the best of the best reach the top.

Don’t forget to answer the call & rate us as one of the best games on the Play Store.

You can download and play this game for free. Please be informed that it also allows you to play using virtual currency, which can be acquired as you progress through the game, by deciding to watch certain advertisements, or by paying with real money. Purchases of virtual currency using real money are performed using a credit card, or other form of payment associated with your account, and are activated when you input your Google Play account password, without the need to re-enter your credit card number or PIN.

RADIOACTIVE WEAPON AFFINITY – 33 years ago? That was the first prototype.

RESISTANT SQUADMATES – The grittiest squadmates ever released, born and bred to fight under the direst of conditions—through the fire and the rain!

CELEBRATION! – Sniper Fury’s 4th anniversary is right around the corner. Keep a close eye on our social media channels, as well as in-game, for lots of exciting surprises!