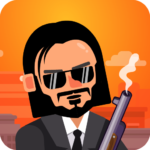 You are a sniper captain, you will save the people in the city from danger. Take a shot!
Identify sniper target, gun up, fast and accurate shooting. Don’t waste bullets, this is a sniper game with interesting gameplay.

Latest play of the year. Touch the screen to target, drag, drop and boom … the target will be destroyed. Easy controls for the fastest sniper. Sniper assassin has never been so easy

A sniper captain walks around the city and always has his gun ready, you face the most dangerous targets. You are a sniper assassin in Sniper Captain, your shots are the strongest and most accurate.

Unlike the sniper games you have played, in the free shooting game Sniper Captain, you will mix guns at different levels to create the strongest weapon. The stronger the gun, the faster the bullet path and the opponent is destroyed. Not much time, you have to shoot down targets from a distance, bad guys can escape before you act.

World of Prandis (Around the world MMORPG)