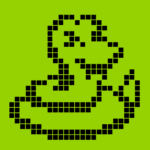 The game is a remake of the Snake Xenzia with pixel graphics and monophonic sounds. The goal is to make as many points as possible by making the snake eat stuff that shows up. The more you eat the longer will the snake grow. If the snake collides with itself the game ends. Snake is one of the most popular arcade games. There are hundreds of versions of this great game. This version of the game was redone from the old cell phones of the famous brand. In other languages, this game is also called “yılan”,”ثعبان”,”เกมงู”,”스네이크”,”مار”,”スネーク”,”贪吃蛇”,”Rắn săn mồi”,”Змейка”.

Mazes
There are five mazes you can choose between, plus the “no maze” option. If you select “no maze,” there are no walls. When the snake goes out one end, it comes back through the other end. Maze 1 is just a wall around the course. The mazes get harder and more complicated the higher the maze’s number is.

Campaign
In campaign mode, you can go through all the mazes in one game. Eat a certain amount of apples to move to the next maze.

Controls
Snake control methods:
• using gestures;
• by pressing the left / right half of the screen to rotate the snake’s head;
• using the volume buttons;
• using the keyboard.
Added the ability to remove ads
The design of the window that appears when losing is changed
Fixed bugs