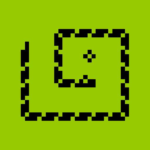 Snake the classic mobile game appeared in the 2000s, is back in the shape of an improved version to Android smartphones.

The Snake game development has had as main objectives the conservation of the original visual elements and the inclusion of current technology. On the one hand, it is about repticated images pixel by pixel, but on the other, new features, like online leaderboards, have been added in the game.

This version of Snake includes the following features:

1. We can choose the speed of the snake between 5 difficulty levels.
2. Tables of local and global scores to compete against your friends or against players from around the world.
3. We can unlock achievements according to our deeds.
4. Sporadic updates with new features and improvements.

Guess the Character of Inuyasha 1.0