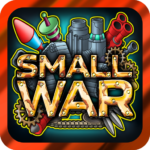 👍 Strategy based on merge mechanics
The game fills the popular merge genre with a deep strategic meaning. It would seem that everything is simple: in order to get a unit of the upper level, you need to connect two single-level ones. But add the control of oil rigs for reproduction, the capture of cities, the study of scientific perks and the variety of fighting races, and you get Small War – a simple but unusual tactical turn-based strategy that will appeal to both beginners and hard-core strategists.

👍 A variety of tactics and high replay value
• 7 unique races that will never be encountered in other games, here are fighting on an equal footing
• 35 types of units, differing in characteristics and tactics, will make each party unique
• 5 game modes will find a response both among fans of dynamic tactical battles, and among experienced strategists

👍 Dynamic
• Average batch length – from two to five minutes
• The parties move in turn, as in chess, which excludes long pauses between moves
• Replayability – you can replay again and again, because each game will be different from the rest

⚀Tactics
This mode can be compared with a very fast and fun chess game.
The player and AI are given several warriors. Their task is to destroy the opponent’s forces, taking advantage of the advantages of the selected races, bonuses and cells of the territories.

⚁Oil Capture
There are oil wells on the map, control of which gives to player resources to maintain the army.

⚂Survival
Defend your base from enemy raids.

⚃Capture Cities
New units are created from the population of captured cities. The goal is to grow your population to the target values.

♟Humans
Earth fighters. They have average combat characteristics, but their military bases are able to fire the enemy remotely.

♞UFO
Alien invaders. They have genetically modified soldiers and flying ships, and their military bases are able to move around the battlefield.

♝Robots
Revived mechanisms. They are capable of treating wounded allies, which allows robots to significantly increase their survival rate.

♜Monsters
The awakened ancient inhabitants of the planet are giant dragons and spiders. They do not have the ability to attack remotely, but they are extremely powerful in close combat, and their bases have the support of Earth forces, which allows them to heal wounded allies at a distance.

♛Zombies
A variety of living dead. They are distinguished by the fact that their rivals themselves become zombies after death.

♚♚Atlants
Inhabitants of the underwater depths. Incredibly strong near water, but lose their abilities in the distance.