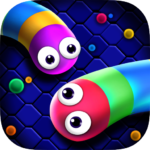 Do you like snakes? It’s cool if you don’t because these snakes are no threat to you – other players, on the other hand. Enjoy a twist on an old classic with Slink.io! Like the classic game Snake that graced ancient cell phones and computers for decades, Eat glowing orbs and grow in Slink.io! this is a multiplayer game that lets you become a black insatiable snake, or choose other skins. When you slithering across orbs, you will grow longer and wider. This crawl slithering snake battle game is part of .io games family.

How to play:
Controlling your worm in Slink io is simple, as your crawl is entirely controlled using the mouse. The worm will continuously slithering in the direction of your mouse pointer, so turning your crawl worm is as simple as moving your finger skill serve as a quick speed boost, allowing you to get out of the way of enemy worms quickly. Slink io features cartoonish graphics and no text, sound, or music, making this a safe game for both school and work. By sharing the game on social media, you can get more enemies.

• Go fast to the center of the map and steal food from enemies.
• Cross the path of bigger slithering snakes to get them to run into your body.
• Trap other players by circling them.

Enjoy and good luck to achieve results on the leaderboard.

* Resolved the App Crashing issues.
* Game performance is now smoother than ever.
Have fun with Slink.io 🙂

walkthrough for friday the 13th