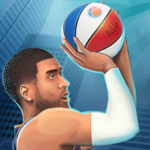 Fans of basketball games and basketball fanatics, it’s time to show off your basketball shooting skills! How would you like to be a basketball star? Put your skills to the test: make as many three point shots as you can with 60 seconds on the clock, take part in our awesome three point contest and dominate the court!

HOW TO PLAY:
1. Touch the screen to pick up the basketball
2. Hold until the bar is full
3. Release to shoot a 3 pointer – if you lift your finger too early or too late, you’ll miss the shot!

FEATURES:
Realistic 3D graphics
Player customization options – choose the name for your player and team
25+ cities – variety of environments to play in
3 missions in each city
Daily missions for extra experience points and rewards
30+ unlockable basketballs

Enter the competition and practice until you become a star of shooting hoops!

Shoot basketball from the three-point line and get the balls in the hoop in the shortest amount of time! You’ve got a minute to complete three missions in order to move to the next city. Start in New York and travel around the world as you’re shooting hoops in 9 regions of the world!

Brace yourself, your basketball shooting skills will be put to a proper test!

As you move around the globe and change cities and basketball courts, your three point shooting skills must improve rapidly to successfully complete missions. Missions become more challenging as you progress through this basketball game: you’ll need to score more points with more time left on the shot clock, or finish your three point shooting series without making air ball or brick balls. Feel the thrill of scoring a buzzer beater and do not let your nerves get to you!

TELL US WHAT YOU THINK of our basketball game!
Users’ feedback is important to us as we’re working on new updates of our three point shooter!

Allex and the Communication