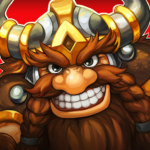 Asgard’s defenses have fallen! They need your help!
Lead your team of heroes to defend against the Undeads, once and for all!

# Take Your Pick!
There are over 300 heroes to choose from!
Build your own team of heroes from 7 different classes: Warrior, Rogue, Archer, Defender, Wizard, Golem, and Warlord.

# Need Back Up!
Support the team with the right tank, each empowered with special abilities!
Clear the old Sanctuary towers of Asgard to unlock the Ancient Protectors and add their mighty powers to your deck!

# Gear Up, Team! We Have a World to Save!
Optimize your deck by finding & upgrading the right weapons and gears for your heroes.
You can strategize and build multiple decks for special types of enemies!
Choose your tank wisely! Each tank brings a unique set of skills to the battle field!

# Who’s in Charge Over Here?
Compete against other players and their decks in online PVP arenas!
Fortify your defenses and towers strategically against other players!
Siege and destroy their towers & defenses!
Make allies and team up with your friends to fight off the raid bosses!